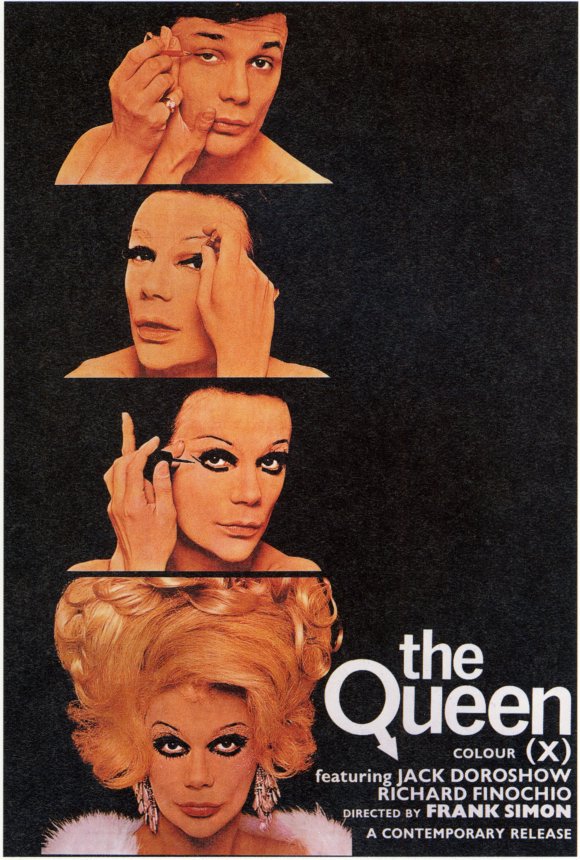 Miss Alfonse from Manhattan knocked us out, but she didn’t win. Richard did, or Richard Finnochio, better known in the drag queen Nationals last year as Miss Harlow. The preparation, rehearsal and crowning victory of such drama is the subject of “The Queen,” a gay documentary about a transvestite beauty contest, Miss All American of 1967. Needless to say, it’s the one subject Wolper never documented. We hesitate to call it a labor of love, but producer Si Litvinoff and director Frank Simon have measured out this world with coffee spoons. If fact, careful editing and the jolt of cinema verite have captured a kind of Prufrockian obsession with braceleted arms “downed with light brown hair” or “perfume from a dress” or “a bald spot in the middle of my hair.”

It is, of course, perhaps irrelevant to use a literary medium to illustrate a visual one, but we bring up Eliot’s J Alfred Prufrock because his neurotic indulgence in daydreams of beauty and pleasure so manifestly describes this rather amazing documentary, presented by Grove Press as a Si Litvinoff-Vineyard Films-MDH Enterprises production. The contestants in this film, whose story and conversations are caught in disarming and often witty banter, are naturally, from one point of view, alienated and lonely, people who have their own answer to themore physical and passionate demands of life. From another point of view, we see them cheerfully babbling about “husbands in Vietnam,” about sex change operations (they are wary of them,) their willingness to join the army (“to protect the country,”) and their total unabashed merry commitment to feminine competition.

As for its box office potential, all we can say is that it’s doing well in San Francisco. It reportedly made a big impression on some directors and critics in a pre-Festival showing last month at Cannes, and it opens here and in New York next week in predictable and exclusive small-house bookings. Naturally, it has some guaranteed customers. But it is a film worthy of good business (and an unadorned, low-key ad campaign) because it is an example of technical skill in the documentary field, because it neither exploits nor glorifies homosexuals but rather explores and mirrors in the best sense of a documentary, and because it is often funny, occasionally in a har-har way to the brash heterosexual but more often in a natural way. Only the most stupidly virile redneck will fail after the initial unconvention of it all to more often laugh with these drag queens rather than at them.

The film opens with narrator Jack Doroshow (Sabrina,) the pageant’s director and mistress of ceremonies, talking to his mother over the telephone and inviting her to the contest. He also makes a few remarks that are pertinent to the world at hand: “When you ask a drag queen ‘what was your name before?’ the queen will look at you straight in the eye and say ‘there was no before.’” Later, as we watch the boys – like any group of girls, some are pretty and some are homely – the narrator says off camera that each “queen’s drag scene is love and they try to get it by being sexy and beautiful…it’s a fantasy bag.”

It’s such verbal verite, coming from a swish, that informs the film as much as the work from the five cameramen credited with the lensing. Largely, however, the soundtrack records the youths in their hotel rooms as they primp and makeup for the big night in Manhattan’s Town Hall. At one impressive point, the footage goes silent and the camera roams cluttered hotel rooms as we watch some 8 or 9 fussy lads taping down their hair, combing their wigs, applying eye shadow, etc. One rather chubby fellow is enamored with this cleavage, there’s a close-up of a queen examining her face in a mirror and, then, from outside, gradually filling that incredible room, is heard a siren, a wail from the other world heightening and drawing with exceptional skill the contrast between this cluster of outcasts and the routine and violent noise of the world out there.

Now switch to the jammed Town Hall auditorium (we catch glimpses of a couple of judges, Andy Warhol and Terry Southern) and the parade of stars. They waltz up and down an apron in dazzling gowns (they’re not allowed to drop any clothes because that would smack of a leering striptease) and five finalists are named, and svelte, blond Richard (Miss Philadelphia) gets the crown. Earlier, she – he – had tossed in bed and moaned because his fall had not yet arrived. Now a winner, he is violently berated by one of the losers who claims the decision was rigged. Richard is weeping, a forlorn image in the dressing room. And, at the end, in a particularly telling statement, Richard sits alone in a bus terminal, a shattering image of loneliness, dejectedly curling his fingers around his pretty, silver crown.

Not least among the film’s achievements is that it is conveyed in 68 minutes in sharp, paced editing. Certainly, the subject is not among the world’s most crucial, but as a study of people who have their own fantasy bag, as an observation of whose who obsessively devote their lives to the way they look, it is a reflection of one kind of human condition and done with candor and skill.